John W. Calder, a veteran of both world wars and a member of Utica Post 229, was inducted into the Oneida County Historical Hall of Fame in October 2009 during the Historical Society’s Hall of Fame and Living Legend Banquet at Harts Hill Inn in Whitesboro.

He was one of four inductees, whose contributions and dedication to their work have improved the lives of citizens of the greater Mohawk Valley. The other inductees are: Ed Bass, a founder of Oneida County NAACP; Charles W. Hall, president of Oneida National Bank; Frances Mirian Berry Whitcher, a 19th century writer and humorist. 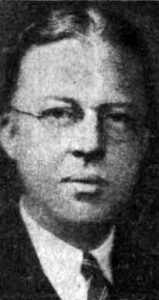 John W. Calder was born in Utica on May 5, 1892, the son of Dr. John Franklin and Adelaide I. Calder. He graduated from Utica Free Academy in 1910, where he was active in Epsilon Tau Pi fraternity. Calder then entered Hamilton College and joined Alpha Delta Phi fraternity, and served on the building committee, even after graduating in 1914.

In March 1917, Mr. Calder joined the U.S. Naval Reserves, just prior to America’s entry into World War I. He transferred a short time later to the U.S. Army, and served in France with the Army Medical Corps. First Lieutenant Calder was discharged just after the end of the Great War, in February 1919. Later that year he married Pauline Carmichael.

During the 1920s Mr. Calder was appointed as chairman of the Utica Park Board. He was instrumental in the planning and construction of the Valley View Golf Course, one of the first municipal golf courses in the nation.

As a boy, John took an interest in curling. He joined the Utica Curling Club and developed skills that would take him to the highest levels of the sport, allowing him to participate in the 1932 Winter Olympics at Lake Placid. While curling then was only a “Demonstration Sport”, and not yet accepted as a permanent part of the Olympics, John’s continuing interest led to his election as President of the Grand National Curling Club of America. For over fifty years, the sport of curling was a large part of his life.

Calder remained in the U.S. Army Reserve between the world wars, and was recalled to active duty in 1941. He served as part of the General Staff of the second task force to enter the Pacific Theater, after the Japanese attack on Pearl Harbor. Later in the war he returned to Utica, as Adjutant for the Rhoades General Hospital. He served at another military hospital in Brentwood, Long Island, where in February 1946, now Major Calder was discharged.

Then Mr. Calder entered the insurance industry, and founded Utica Underwriters Incorporated. A tireless community advocate, Calder became active on the Board of the Utica YMCA, the Players Theater, American Legion Post 229, the First Presbyterian Church, and Liberty Lodge #959 of the Free & Accepted Masons. He was also a member of the Yahnundasis Golf Club and the Fort Schuyler Club, and served three terms as President of the Oneida County Tuberculosis and Health Association.

Mr. Calder’s greatest service may have been his leadership in improving the old Memorial Hospital, chairing its board for several years leading up to its 1949 merger with St. Luke’s Hospital. He again served as Chairman of the new St. Luke’s Memorial Hospital, into the 1957 construction of their new $3.2 million building on Champlin Avenue in New Hartford.

John Calder died on April 20, 1957, in the old Memorial Hospital that he had served so well — just eight days before the new hospital was opened. He left his widow, Pauline, a daughter, two sons, and several grandchildren, in addition to a legacy of a life spent improving the lives of the citizens of greater Utica.