Utica Post 229 Commander Bill Sequin led a pilgrimage of wreath-laying at eight war memorials around the city, thanking everyone who came out to honor those who made the ultimate sacrifice to protect America. [MORE PHOTOS]

He echoed the words displayed on the Post’s outdoor LED sign: “Freedom is not free.”

Sequin was joined by members of the Post, the Auxiliary and Sons of the American Legion, along with the Vietnam Veterans of America (VVA) and the Military Order of the Purple Heart. Along the way, Utica Mayor Robert M. Palmieri and Rep. Claudia Tenney joined the tribute. The mayor, along with Legionnaire Ed Jackson, placed a wreath at one of Utica’s oldest war memorials, the Soldiers and Sailors Monument. The congresswoman helped place a wreath at the city’s newest monument, the All Veterans Memorial and Battlefield Cross in front of the Adirondack Bank Center at Utica Memorial Auditorium.

Post Chaplain Paul Wojcik and retired Army Chaplain Gary Howard offered prayers and blessings at each site, and Oneida High School student Julian Egelston played taps on his trumpet. (Egelson’s grandfather, Jack Reising, was participating as a member of both the VVA and Order of the Purple Heart.)

Tom Buono, president of VVA Chapter 944, led the ceremony at the Vietnam Veterans Memorial, where two VVA members laid a wreath. Joe Fraccola, commander of the Central New York Chapter of the Military Order of the Purple Heart, presided at ceremonies at Purple Heart Park and at the Adirondack Bank Center. Fraccola noted that the newest memorial was dedicated in 2018 on the same day that the Utica Comets team was officially designated as a Purple Heart Hockey Club. Purple Heart-recipient Rick Redmond, who is general manager of Adirondack Bank Center, had the honor of placing the wreath, along with his wife Amy and Congresswoman Tenney.

Afterwards Buono noted that, like other wartime veterans, Memorial Day was very special to him because of the friends he lost on the battlefield. 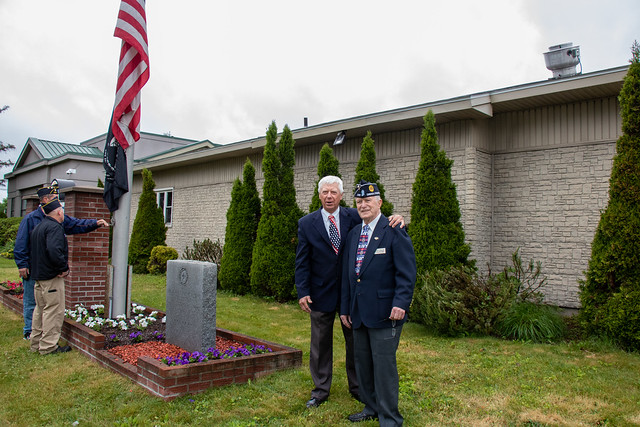